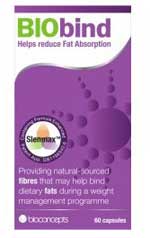 As the name suggest, Biobind is a fat binder. This one is produced in the UK by Direct Healthcare and marketed exclusively via the ChemistsDirect.co.uk website.

Not surprisingly the product is marketed on the back of some pretty impressive claims:

Direct Healthcare appears to be a reputable company, but in 2012 they were forced to remove certain claims from their website after an investigation conducted by the ASA concluded the claims were misleading.

What Fat Binders Do & How They Work

Fat binders do not suppress the appetite or encourage the body to burn of excess fat. They have only one function—they limit the amount of fat the body can absorb after a fatty meal. Anyone who eats a healthy, low fat, diet will have no need for any form of fat binding product, but for those who cannot resist the temptation of fatty food, or whose lifestyle and/or work commitments make it hard for them to completely avoid such foods, fat binders can be a useful damage limitation device.

Effective fat binding ingredients can absorb large amounts of fat, but they invariably prove too difficult for the body to digest, so they pass through the body undigested—carrying the absorbed fat with them—and are finally passed with the stool.

One to two capsules are recommended prior to fatty meals, but no more than six capsules should be taken in any 24 hour period.

In an interview with the Daily Mail, former Eastenders and Hollyoaks star, Gemma Bissix, stated she retained her shapely look by sticking to a diet and exercise regimen, but said she was unwilling to forsake her favourite high fat foods, such as mayonnaise, and admitted to using Biobind to avoid the consequences of her lack of willpower: “It means I don’t have to deny myself and my diet works around me.”

The manufactures fell foul of the ASA and where found guilty of misleading advertising and exaggeration.

Some customers are very pleased with Biobind and proclaim it to best thing since fried bread:

“This is the second time I have used Bio Bind and Iove it! If you stick to a healthy eating plan and moderate exercise it does help weight loss quicker.”

Such responses are in the minority though. A more typical review reads:

“Total waste of money, been on this for 2 weeks, did have healthy diet and done aerobics 3 times a week, no weight loss whatsoever.”

Biobind should not be used alongside medication or any other supplement without prior medical advice. Pregnant and nursing mothers should also consult their doctor before commencing any form of supplementation or weight loss regimen.

Fat binders are designed to help dieters limit the amount of damage caused if they err from a low fat diet. As a weight management tool their use is very limited so fat binding products should never be seen as an overall weight loss solution. Many people do not understand this, which may account for the profusion of negative reviews Biobind has received. The actress Gemma Bissix is obviously aware of Biobind’s limitations, and uses it conjunction with her existing weight management regimen, so it is little wonder that her enlightened view to weight management has reaped such positive results.

The majority of users who are educated in the correct use of fat binders will probably find Biobind a useful addition to their arsenal of weight management tools, but the lack of inclusion rates is an issue and—despite the problem of user ignorance about the correct application of fat binders—some alternative product have attained higher amounts of positive feedback.

So will Biobind work? Probably, but some of the alternatives available will probably work much better.

According to the Chemist Direct website the RRP is £29.95 for 60 capsules and the illusion of a bargain buy is provided by offering a 50% reduction in price.  Postage and packaging adds around £4 to the price. Purchases do not appear to be protected by a money back guarantee.