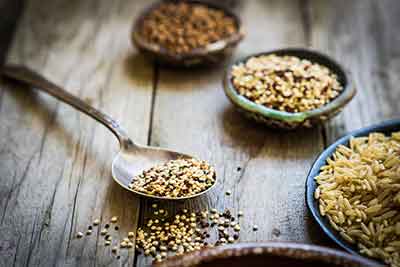 Quinoa is an understated grain-like food with some interesting characteristics that might help it make its way to even more shopping lists than it does today.

It’s one of those foods that began its road to mass popularity on the shelves of natural food stores. We (me, mostly) used to call those ‘hippie’ stores when I was younger.

Everything in was three times as expensive as our usual grocery store…and about 10 times duller in flavour.

Back then, people didn’t really know what to do with it. It was a bit like couscous in that, no matter what you did to it, it tasted like boredom on a plate.

These days, there are quinoa burgers, chilis, curries, salads, cookies, cakes, and everything else in between.

Is it the tastiest part of these recipes? No…but it’s a cracking base, and it’s healthier than the equivalent mass of a lot of the alternative ingredients you can replace it with. 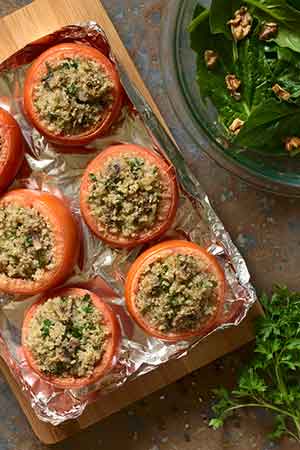 One of the keys to a healthy diet is getting the most out of what you are eating. Not only does it ensure you are getting a good amount of vitamins, minerals and the macro nutrients (protein, fat and carbs) but it helps you stay slim – or get slimmer.

Hunger is, at its most basic level, a signal that you need nutrients. Keeping your hunger satiated is not necessarily a question of volume – as many people think – but of nutrient density.

Provided you are getting a good balance of nutrients, and enough energy from what you eat, the size of the portion is of less significance.

Quinoa contains many more nutrients that a lot of its alternatives. It looks, acts, and can be cooked as a grain in many ways. However, it is not a grain really – as you will see later – and it has other tricks up its sleeve that help elevate it to the ‘superfood’ category.

For one thing, Quinoa is a good source of protein. Other grains lack in this area because the overall amino acid profile prevents them from being a primary protein source.

A classic meal usually consists of a piece of meat or fish along with vegetables and a more carb rich source.

Quinoa can be the complete protein source, and when flavoured appropriately, can outshine meat in many ways.

For vegetarians and vegans, you can imagine how valuable a grain like this is which can allow a protein-rich diet.

Fat is all the rage since dietary cholesterol, and to some extent saturated fats, have been vindicated.

The traditional healthy fats however still remain as the dominant type in a healthy diet. And unlike most grains which take hundreds of calories to provide just 1 gram of fat, Quinoa does it in a little over 60 calories.

Oleic acid, the monounsaturated fat found in eggs, comprises nearly a third of the healthy fats quinoa provides. Alpha Linolenic Acid – an Omega 3 fat – makes up a few per cent.

Antioxidants are well established as one of the defining characteristics of healthy foods. They have been shown to possess anti-inflammation, anti-cancer, immune boosting properties but the two major antioxidants in quinoa are special.

Quercetin is also neuroactive as well. Though less potent than caffeine, it has some of the same abilities.

This flavanoid also goes well with Green Tea catechins and Resveratrol by increasing their bioavailability and enhancing their effects.

Kaempferol is an anti-obesity and neuroprotective agent, on top of its impressive anti-carcinogenic activity.

Unlike vitamins, phytonutrients are not essential for life. Instead they boost the immune system, and further help you to fight disease in addition to a vitamin base.

They can also help reduce inflammation. Examples in quinoa include phenolic acids and saponins.

The positives of quinoa are comprehensive, even stretching into blood sugar maintenance. It’s therefore a very good asset to people with type II diabetes.

It is also showing promise as a benefit to the cardio vascular system, particularly in terms of cholesterol balance and protection from blood vessel inflammation.

There appears to be a smaller chance of being allergic to quinoa.

Not Really a Cereal Grain

Quinoa is in the same family as swiss chard and spinach, oddly. So it is not really a cereal grain at all, despite the fact that it makes a great alternative to them.

It is gluten-free, making it easily digestible and has made its way into savoury and sweet recipes.

Due to minimal cases of low tolerance and its digestion factor, it has become a solid choice to be included in baby food, and anyone with sensitive stomachs. 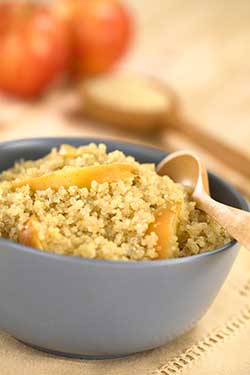 The best way to cook quinoa is to bring it to a boil in 1 part quinoa, 2 parts water ratio. Once it boils, reduce the heat to low, cover it and allow the liquid to be absorbed.

Dry roasting it before doing the above can improve the flavour somewhat, especially when it is to be used a main source of protein or, say, a burger.

To dry roast it simply put it in a saucepan dry and heat on low to medium while stirring for five minutes.

There are many many recipes for quinoa. Hopefully you can include it a couple of times a week in your main meals.